Slavery in the Late Roman World 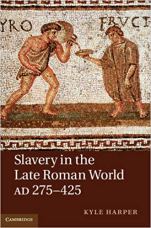 In his masterful work Slavery in the Late Roman Word, AD 275-425, Kyle Harper’s main achievement consists in the presentation of the rich source material for Roman slavery in the “long fourth century (AD 275-425).” This contribution allows a new view of Roman slavery during the period. While rejecting earlier prevailing views that the fourth century was often regarded as a period of decline of slavery, Harper develops his thesis that the ancient slavery did not slowly and gradually came to an end during these years, but abruptly came to an end in the fifth century when the Roman authority in the West actually collapsed; he calls it a “systemic collapse,” which he outlines a brief outlook in the conclusion (497-509).

Harper’s book is divided into three parts of four chapters each: part one deals primarily with the economic aspects of slavery, part two with the social facets of slavery, and part three with legal issues relating to the status of slaves.

Part I acts as an introduction to the book, primarily challenging the view grounded in “conquest thesis” of slavery. This thesis claims that Rome became a slave society as a result of slave-taking enabled and justified by military victories, but in the late antiquity, Rome ceased to win wars that contributed to the decline of slavery (3-10). Harper disputes this idea. Instead, he shows that the supply and circulation of slavery in the late antiquity continued, via natural reproduction such as breeding among slaves, internal enslavement within Roman borders such as self-sale, child exposure, abduction, and trans-frontier importation such as slave raiding and trade; therefore, slavery neither disappeared nor diminished (21-99). Rather, it remained as a “vigorous institution (3)” despite the declining influx of enslaved war prisoners. Responding to this account of the supply of slaves, the last two chapters of Part I shows how the demand side of Roman slavery operates. Examining four types of labor performed by household slaves (unskilled domestic work, skilled labor, textile production, and agricultural labor), Harper emphasizes the economic significance of slave labor, not only to the maintenance of households, but to the productive output in textile production to small-scale agricultural cultivation to large- scale agricultural business (153-156). In particular, large landholders and individual entrepreneurs, depending on their goals and conditions (e.g., the differentiated costs of free and slave labor, the legal involvement of agriculture, and the dynamics of estate management), relied on various types of labor where cost effective such as slaves, tenants, free labor, or a mix of them (144-200). For Harper, this economic complexity highlights supply and demand for slaves but also the legal institutions that uphold the integrated world economy system of the Roman Empire. In this regard, his first and foremost argument is convincing that it was not the fourth century Rome’s receded slave-taking in war but the loss of economic complexity that in the fifth century critically caused Roman slavery to weaken (15).

Part II explores the structure of master-slave relations, evidently refuting the viewpoint of “amelioration thesis,” which argues that Christianity improved master-slave relations (209-214, 246). This does not mean that Harper simply rejects the contribution of Christianity to the decline of slavery; in fact, he admits that Christian precepts on status and sexuality significantly but slowly challenged Roman norms as the society was gradually becoming a Christian society (217). However, Harper argues that Christian ideology of slavery represented “rather a baptized version of it [Roman ideology of slavery] (212),” and that the Church accommodated to the slave system. For example, discussing the sexual exploitation of dishonored women such as slaves, prostitute, and even poor freed women, Harper shows how little the Church substantially achieved social justice to secure or promote a political right of slaves such as an abolitionist tract in reality, not only due to their teachings directed towards refining for philosophical Christians, but due to their primary concern about mastery or slaveholders; for secondary, slavery (e.g., Augustine’s teaching on sexual honors; “honorable women” were expected to engage in sexual activity to produce legitimate heirs, while “dishonored women” such as concubines, prostitutes, and slaves, who were vulnerable to exploitation, 282-285, 345-348).

Part III examines the role of the state in upholding the system of slavery, especially with regard to the law concerning personal status. In particular, Harper opposes the theories of “merger” and “status confusion,” which insinuate that slave status became less meaningful after the third century due to external influences such as the Barbarian invasion and the Christianization of the empire, and thus that slaves and the free poor became almost undistinguishable in the fourth century (360). Instead, Harper emphasizes that the late Roman legislation on slavery was driven by the empire’s increasing management issues mainly due to the means of regulating slave status in the law of slavery, which rested on lax enforcement, gentlemen’s agreement, and competing goals and interests, practical and symbolic (430-448). For example, manumission was regarded as not merely an incentive mechanism by which a fiscal investment was amortized (e.g., slave’s longevity), but also as a moral and political act with significant honor consequences in the late Roman society. However, in practice, the matter was complicated as the classical law provided loose guidance on these issues, ultimately relying on judges to discern not only what was honorable and legal, but also whether and how such “policing” honor would supersede abstract economic judgment that meets or even maximizes the need of slave supply for running society.

Above all, Harper successfully introduced a new perspective of the late antique slavery that has been barely studied, with emphasis on the master-slave relationship and the following slave roles which are more complex than previously thought. In particular, Harper, as a historian, employs the method of source criticism, questioning how precariously it was to assume only one real source of slaves in the long fourth century, and to construct theories on its basis, whether they are on conquest thesis, amelioration thesis, or theories of merger and status confusion. He rejects the idea of a dominant heuristic approach and instead focuses on the interaction of a series of variables that is his expertise of the historical interaction of the “systems” of late Roman slavery.

For example, Harper enjoys employing two models together with some modifications to discuss the master-slave relationship—incentive model and honor system. On the one hand, borrowing from Stefano Fenoaltea’s incentive model that incentives contingent on the environment occupied by the master and slave, Harper argues that social life in the fourth century was made up of the complex interaction of increasingly differentiated and yet reflexive institutions—farmers and food, consumer needs and business, culture and entertainment, law and legal structure, social and economic policy and government, the domain of everyday life, and the social spaces or planning that make (or did not make this) possible (159, 219-245). On the other hand, he emphasizes the late Roman sense of honor that has been mainly studied by Keith Bradley and Moses Finley (37-39, 149-152, 188-199, 214, 241-246, 274-283) that the relationship of slaves to others’ honor was one of the deep structure of Roman society. These two models interact and even crash to each other as introduced in the end of the previous paragraph (dealing with legal cases like manumission—policing honor vs economic judgment).

Indeed, using a variety of institutional analyses like incentive model and honor system, Harper’s integrated approach fulfilled his overall objective to describe how late Rome also counted as a slave society in terms of the structural location of slavery. His goal is also not to show how bad Roman slavery was (246), as he is more interested in how such institutions impacted on the lives of slaves. And this is not a bad thing per se; it is a human thing. We organize things; we seek some measure of expertise with them. The city of Rome was an institutional space in many dimensions with a plurality of goods. However, this viewpoint may leave some questions for ethicists and social thinkers because it also shows the lack of Harper’s understanding of moral quest in depth (regardless of his academic interest). The trouble is that these institutions can get sick and turn against life, just like bodies can get sick and turn against life. In many cases, business and economic institutional spaces begin existing for sheer profit (the logic of “more” rather than “better” or simply more = better); political institutional spaces begin existing for sheer self-preservation (the logic of “us” rather than “human flourishing” or simply us = human flourishing); cultural institutional spaces begin existing for sheer pride and self-perpetuation (be that of an individual or nation) rather than the intrinsic good of beauty and free expression.

Interestingly, each part has its own introduction. On the one hand, this work deserves a very clear, well-grounded introduction; on the other hand, this leads to a number of repetitions, which could have avoided an explanatory while summarizing introduction. To be brief is not Harper’s strength, which he himself also admits in the preface (xii), and this problem runs through the entire book. Further, this repetitive issue allows him a very firm but thin description that is practiced by the linear process of applying rules to facts, not in the multidimensional ways. For example, his analysis of slave responses to exploitation closes with a description of the power dynamics generated by the existence of both horizontal and vertical loyalties within the slave community—how the segmentation of slave labor prevented the consolidation of class solidarity among slaves (274). However, Harper seems to disregard the positive side of such segmentation of slave labor that could rather promote the consolidation of class solidarity due to not only its nature of loyalty and well-ordered labor practices among slaves, but also the lack of his linear analysis, overlooking various social factors other than class such as race, gender, origin, religion, age, and type of labor that might help facilitate solidarity among slaves.

Finally, his work is resourceful for both biblical scholars and ethicists as well as scholarly preachers and theologians who have willingness to engage in interdisciplinary collaboration with social history, classical studies, and theological anthropology, primarily questioning: what was the sign of the fourth century within the “systems” of Roman slavery, particularly for those slaves, the voice of the voiceless? Why is it still important today? These questions will not only help describe more accurate political realities in the period but they also open our eyes to Christian identity and truth, reminding us of the broader and deeper horizons of meaning to moral living that history is more about now and the future than it is about the past. For Christians, the dead are not simply gone, but remain in our “neighbors” in the kingdom of God, and Christians are called to love their neighbors, including those slaves and the voiceless back then. Thus these questions present a special exercise in doing our best to listen to our humble neighbors, to respect their voices and to learn from their virtues (e.g., honor and loyalty) within the political realities of slavery that they were trying to capture (e.g., incentives and liberation). Further, by paying attention to these questions, we acknowledge that we have not suddenly figured them all out. In addition to being intrinsically grateful for our forbearers, who struggled for social progress and social justice, and embracing the command to love our neighbors, we also have something to learn from the “backwards,” those that have gone before, those on whom we often turn our back. One lesson in particular that we will learn—with both sadness and excitement—is that many different Christians (e.g., Christian emperors, slaveholders, slaves, judges, and church fathers) believed many different things, and so a deep humility is fitting to whatever it is that we cherish as truth today.

Like Loading...
‹ Vol. 6 No. 1
Finally Belonging: The Reception of the Parable of the Prodigal Son Among Asian Americans ›

Feature Book of the Issue