The Rise of Christian Art in Contemporary China

Exhibition: “The Spirit in Fire and Wind: Christian Art in Contemporary China”

In May of 2019, I introduced several Taiwanese Christian artists and their works in my paper “Garden of Eden in Taiwan” presented at the conference of “Chinese Christian Art and Literature” at Purdue University, IN. The three-day conference, organized by the Center on Religion and Chinese Society, was attended by many outstanding contemporary Chinese Christian artists, writers, and scholars. Beside the presentations and scholarly exchanges, the highlight of this conference was an exhibition at the Public Library of Purdue University, titled “The Spirit in Fire and Wind: Christian Art in Contemporary China.” Sponsored by the Center on Religion and Chinese Society, the exhibition was curated by Hao Qingsong and chiefly devoted to the subject matter of Chinese Christianity. The 36 pieces of artworks by ten Chinese Christian artists, mostly from Beijing, in different forms—paintings, sculptures, films, and devices—were made between 2000 and 2019. Ranging from contemporary ink painting to performance art, the art forms are diverse, yet, all of which are clearly made by artists who aim to use arts to witness their Christian faith. I am deeply moved by the social concern manifested in these artworks with Christian devotion. The pursuit of the Christian faith in Chinese society has been extended from the peasants and working class to the arts and cultural circles with certain economic and educational levels. Worth noticing is that the majority of the works reflect the artist’s social critic to the Chinese society, showing the artist’s talent of creativity as well as their love to the people and the vast land of China.

The exhibition was held in the school’s library so that students can come to enjoy the arts during the break. Seeing through the gallery, works in various media were displayed on the wall. Some wooden sculptures situated on the pedestals in the center of the space. Some of the photographic works are reproduction of the life size sculptures and installation. This is a rare presentation of contemporary Christian art works from mainland China that one cannot easily get to see outside of the country. Indeed, it is a challenge to put together an exhibition of many of these works, delivering from the country where the religious freedom, the right of people to their belief, is still restricted. The exhibition seeks to suggest a complete view of the works though within a given space that is related limited for displaying large sculptures.

To understand the significance of these works, it is useful to remind the viewer that historical development of Chinese Christian art evolved in four stages. The first stage began from the Nestorian Christianity disseminated to the Tang dynasty of China in the sixth and seventh centuries to the short-lived Franciscan missions during the Yuan-dynasty (1279-1368). The second stage of the Christian evangelization to China started when the Jesuits re-started Catholic missions to China from the sixteenth to eighteenth centuries. During this period of Western expansion, Jesuit missionaries played significant roles in the cultivation of art, due to their more open attitudes toward other cultures and religions. The third stage of Chinese Christian art was the awakening of the Protestant and Catholic missionary movements from the nineteenth to twentieth centuries. The appropriation of Christian art in the fourth stage continues to take place in China from the post-World War II period until the present.

On the Protestant side, James He’s colorful painting “The Great Commission” (Fig. 1) represents the contemporary development of Chinese Christian art using traditional Christian iconography. The various biblical narratives about human life and sufferings are James He’s favorite subject matters. James He (aka He Qi) was an art professor at the Theological Seminary of Nanjing. Growing up during the cultural revolution, he first discovered the power of Christian art in a Raphael’s Madonna and Child picture. The colors and patterns of his works were inspired by the folk art of paper cutting and his many trips of visiting the indigenous people in China. James He’s artwork is a blend between woodcut and paintings with bright colors, embellished shapes and thick strokes.

Dao Zi’s ink wash painting aims to depict the redeeming light of grace shinning on the vast land of China with thousands of years of suffering. To Christianize Chinese culture through the blood of Christ is the artist’s clear visual strategy. In 2016, Dao Zi created the painting “Demolition: Misfortune and Blessing” (Fig. 2) to commemorate the 2015 massive dismantling of churches and crosses in Zhejiang Province. We see on the top of the work a black cross was depicted as being plugged off from the roofs of churches by a giant black crane. Another big red cross was pulled down in the background contrasting to the dark land in the middle of the work. Yet, in the midst of chaos, two angels with golden halos seem to witness God’s providence that God will still take care of His people and the land.

“Pass-Over” a contemporary Chinese art exhibition by the artist Dao Zi was held in Cangchengtang Church in Wenzhou, 2019. It might be the first contemporary Protestant art exhibition in the history of Chinese Church. Dao Zi, Tsinghua University art professor, was originally a poet and art critic. He had a great impact on contemporary Chinese art since his baptism in 1997. Dao Zi then developed a new visual language to make his unique style of Christian art, “The Saintism Ink Painting,” coined by the artist to allude to the image of turning Christ’s blood to ink. The artist explains, “I use ink as my main color language which is compatible with gold mud, gold powder, gold foil mixed with the ink-water painting’s gold and green color system and the halo system of cathedral glass painting and then create my own color system. The so-called ‘Qiyun’ in traditional Chinese painting is the aesthetic charm formed by the images of mountains and clouds, misty and rainy clouds, and is utilized to ‘vividness’. However, let the color of Chinese Ink be light. The colors and lights blends, the highest invisible places appear.”[1] 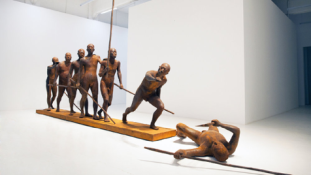 An impressive work is a photographic reproduction of a group of life size iron sculptures “The Parable of the Blind” (Fig. 3), originally made by the Gao brothers in 2016. The Gao brothers is a pair of artist brothers based in Beijing. In this works, they recast the painting of Netherlandish Renaissance master Pieter Bruegel, The Parable of the Blind (De parabel der blinden, 1568) in 3-D form. Alluding to Jesus’ parable of Mathew 15:14 (“Let them along; they are blind guides. And if the blind lead the blind, both will fall into a pit.”) they aim to point to the error of a totalitarian society. Another bronze sculpture by Gao brothers, “Shooting Christ,” reflects the increasingly severe anti-Christian movement that stated in the early 20th century of China.

A multimedia work that catches the audience attention is Zhu Jiuyang’s “Lost Lamb” (Fig. 4 ) A Beijing based artist, works and lives in Songzhuang Art District, Zhu was a shepherd in his young age, while living in the rural area of Shaanxi, China. As a result, depiction of sheep/lamb appeared frequently in many of his early works. After Zhu became a Christian, the artist started to reinterpret the image of the lamb with a hidden metaphor of being astray to criticize the disorder value of the society. Zhu’s installation work “Lost Lamb” is a large life art scene combining installation, performance and sound. The work alludes to the biblical imagery of the Lost Sheep (Luke 15:3-4), decrying the absence of faith in Chinese society. In this performance/exhibition, Zhu drove two thousand sheep into the gallery and hanged one sheep to the ceiling of the hall. The sound of the sheep spreads out through the hallway, creating an intimidating sound theater. Lost Lamb’s predicament scream reflects the confusion of values in Chinese society and calls for God’s redemption.  In these works, the artists have used specific visual strategies to incorporate cultural elements into contextualized expressions of Christian-oriented images. Chinese Christian artists appropriate traditional Christian iconography into their cultural and religious environments, formulating an appropriate and effective form of faith expression that is suitable to and meaningful for their contexts. Their artworks have allowed us to experience the aesthetic elements derived from Chinese soil, such as the beauty of ink painting. In addition, the elements of folk art, Christian visual traditions, and contemporary art language are all nutrients that aid to the richness of contemporary Asian Christian art. The continued development of Christian art in China requires the addition of Asian elements to the historical traditions of Christian art, while the contextualized Chinese Christian art challenges the traditional aesthetics of Christian art. Christian art in contemporary China overcomes the gap that exists between cultural/religious traditions, leading us to see the pluralism of Christian aesthetics. At the same time, the integration of the arts and Christian devotion helps us to understand the rise of Chinese Christianity that creates a space for communication between different cultures and societies. To sum up, the many artworks discussed above make it clear that the Christian faith transforms the artists cultural background, bringing a divine dimension of thought to their works. The universal concerns of humanity conveyed in their works reveal the truth, kindness and holiness in God’s creation in the interdependence of human experience. We see in this exhibition the artist’s social concern, practice, and strategies of interculturation all contribute to the rise of Christian art in Contemporary China.

Feature Book of the Issue