Soon afterwards he went to a town called Nain, and his disciples and a large crowd went with him. As he approached the gate of the town, a man who had died was being carried out. He was his mother’s only son, and she was a widow; and with her was a large crowd from the town.

During the past three months I visited Ferguson, Missouri four times in various capacities: as a teacher, pastor, community organizer, protestor, and witness. When I first visited in August the protestors were still recovering from being tear gassed by police a few days earlier. Throes of militarized police officers, media, and national guard soldiers had transformed the small city into a veritable war zone reminiscent of civil rights scenes fifty years ago. I walked the streets of West Florissant for hours into the evening, watching, talking and praying with protestors whose grief and anger seemed unbearable.

When I returned the next week as a community organizer with hundreds of #BlackLivesMatter riders we marched with the family of Michael Brown. As I watched his parents march in a 105 degree heat index my heart ached for his mother, Lesley McSpadden. He was his mother’s only son. I realized that Michael Brown had become a son and brother to many of us in the Ferguson and greater community; we had lost a precious child of God to senseless and unjust violence. When the burning sun turned into a downpour it seemed like even God joined the crowds in weeping.

Each time I visited Ferguson the crowds gathered at the police station with bullhorns, posters, and chants. With her was a large crowd from the town. I was especially struck by the young black women who united the crowd and led the protests. These women’s voices rang out, “What do we want? Justice! When do we want it? Now!” The cries for justice in Ferguson would not be silenced by mainstream media, politicians, arrests, or racist rhetoric.

Photo 1: The crowd in Ferguson marching with Michael Brown’s parents

Through my time in Ferguson I am wholly convinced that the intersectionality and solidarity between different marginalized groups is essential for liberation. As I reflected on the grief, anger, and power of Ferguson crowds I kept returning to the Korean concept of minjung. “Indigenous Korean people who compose the minjung are the poor, women, ethnic groups, workers, farmers, and peasants who are politically, socioeconomically, intellectually, and/or culturally alienated, discriminated against, marginalized, and oppressed masses.”1 For Ahn Byung-Mu, the father of minjung theology, ochlos (the crowd) in Mark is synonymous with minjung.2

“Minjung theology is critical reflection on the minjung’s struggle for liberation.”3 Minjung theology, like liberation, black, and womanist theologies, is rooted in a specific social location. Out of the Japanese colonization of Korea from 1910-1945 came the minjung’s cry for liberation. “The minjung movement ignited in 1970 when Jeon Tae-Il set fire to himself in solidarity with his fellow exploited factory workers.”4 The Korean church was initially silent in responding to the minjung’s struggle. “When the young students rose up and carried on a bloody war, the Christian church was silent like a mute who had a spoonful of honey in his mouth.”5 It was not until the church listened to the voice of the ochlos that they developed an interest in freeing them from their oppression.6 Minjung theology is rooted in the interest of the minjung, love for the ochlos, a systematization of joint societal responsibility, and choosing suffering over violence.7

Photo 2: A young girl displays a poster during a march in Ferguson

Much of what has happened in Ferguson intersects with minjung theology. The Ferguson protestors are the poor, marginalized, and oppressed in their community struggling for liberation. Michael Brown’s murder highlighted the ongoing violence and inequality that black people face in our nation. Standing with the crowds of Ferguson I grew overwhelmingly aware of my privilege as a non-black individual; I have never worried about police violence against me because of my skin color. For so many black people in our country, the struggle for liberation is a life-and-death struggle for dignity and justice.

This struggle includes intentionally changing the narrative of Ferguson. This change occurs through mediums like social media, creative direct action, and teach-ins. In this way, the narrative of Ferguson protestors parallels what Ahn calls “rumor” in minjung theology. “Rumor, for the minjung of Jesus, is an effort to ascertain their position by correctly recognizing the historicity of that event…When the experience of the persecuted is distorted publicly, then rumor is created in a collective effort to reveal the truth.”8 In Ferguson, rumor is created largely through social media; protestors, activists, and a few journalists are creating a narrative that contradicts mainstream media’s depiction of protestors as violent, riotous thugs. This counter-narrative unequivocally insists that black lives matter.

The following Aboriginal activist quote from the 1970s sums up the heart of solidarity: “If you have come here to help me, you are wasting your time. But if you have come because your liberation is tied up with mine, let us walk together.”9 When people of all ethnic, socioeconomic, and educational backgrounds walk together and declare that black lives matter, the world is forced to pay attention.

As a Korean-American I understand marginalization through my identities as an Asian woman. As an adoptee born into the minjung of South Korea I am intimately aware of how the Korean society I was birthed into shaped the trajectory of my life. I have not and cannot know what it is like to be a black person in America, to live in fear that my life may be stolen away because of a racist system. What minjung theology teaches me, however, is that by drawing from my own experience of marginalization I can open myself up to other people’s experiences of oppression through listening, solidarity and protest. 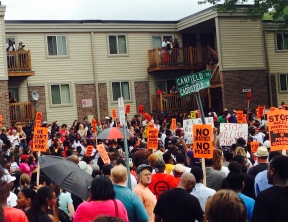 Photo 3: A large crowd of protestors gather in solidarity at Canfield Apartments where Michael Brown was shot

What does it look like for allies to stand in solidarity with the minjung of Ferguson? The response from allies within the Ferguson and St. Louis community has both inspired and convicted me. From the beginning community members have shown support for protestors through donating items like water, food, and medical supplies. Libraries and churches opened their doors to makeshift schools so children could still learn while their Ferguson schools were closed due to the unrest. Activists have faithfully stood with and provided legal support for arrested protestors. Instead of ignoring their privilege, white allies have utilized it to help shield protestors from police violence and amplify the message of racial inequality in Ferguson.

In late August a dedicated team of community organizers planned the #BlackLivesMatter ride to Ferguson for hundreds of riders across the country in two weeks. When the original venue for the #BlackLivesMatter teach-in pulled out, St. John’s United Church of Christ in St. Louis stepped up and served as a physical and spiritual host for the freedom riders. The #BlackLivesMatter leadership mobilized riders to fight for justice for Ferguson and back home in their own communities.

When the call for supporters came in for the #FergusonOctober Weekend of Resistance thousands of people joined the Ferguson community in solidarity. On Friday afternoon the protestors showed up at the Clayton Justice Center in pouring rain. In the evening we gathered at a Latino ‘Day of the Dead’ memorial and candlelight vigil honoring Michael Brown, Kajieme Powell and Trayvon Martin.

On Saturday morning thousands of people marched and rallied for justice. On Monday protestors planned several direct actions that resulted in the arrests of clergy members at the Ferguson police station and activists at city hall and several Wal-Marts. At the St. Louis Rams football game activists displayed huge signs of protest and a large group occupied St. Louis University for a week.

The following Saturday protestors gathered at a Mother’s March to mourn the lives of murdered children. The keening of the women is a sound I will never forget. The cries of these mothers came straight from Matthew 2:18: “A voice was heard in Ramah, wailing and loud lamentation, Rachel weeping for her children; she refused to be consoled, because they are no more.”

Photo 4: The crowd at the Mother’s March remembers the lives of murdered children

In Ferguson the crowds have gathered after the death of Michael Brown, much in the same way as the ochlos gathered to mourn the death of the widow’s son in Luke 7. Through the lens of minjung theology the crowds of Ferguson are identified as minjung—the oppressed and persecuted black community struggling for freedom in a deeply broken justice system. It is only through different groups intentionally intersecting in solidarity and protest that the cry for liberation and justice can truly be heard and reclaimed for all of minjung.

**Photo courtesy: All taken by the article author

Like Loading...
‹ The Christological and Eschatological Significance of Jesus’ Second Sign-Miracle in the Fourth Gospel: Healing of the Official’s Son in 4:43-54
Korean Preaching, Han, and Narrative (American University Studies. Series VII. Theology and Religion) ›