Jerusalem: Complexity in the Holy City

It is called the Holy City: Jerusalem, or as pronounced in Hebrew, Yerushalayim. A unique city where the three faiths of Abraham– Judaism, Christianity, and Islam– exist side-by-side, some of the holiest sites for each faith stand not even a stone’s throw from one another, literally sharing the same walls and foundations. Jerusalem is a city of contrasts: of the ancient existing alongside the modern, the religious beside the secular. It is a city of beauty, of culture, of history, of the sacred. But it is also a city of conflict and division, marked by centuries of struggle and war. It is a city where joy simultaneously exists alongside deep sadness and mourning, where courage exists alongside fear. I have never been in such a place where I have simultaneously felt so strongly drawn forward and yet pushed away: a sense of safety and peace and the desire to stay much longer and yet, an uneasiness, tension, and urge to get away. It is an odd dynamic that I have heard others attempt to articulate in similar terms.

I had the opportunity this summer to study in Jerusalem for several weeks at the Conservative Yeshiva, a co-educational institute connected to The United Synagogue of Conservative Judaism that gives men and women the opportunity to study traditional Jewish texts. During my time at the Yeshiva, I participated in an Ulpan (an intensive, immersive Hebrew language course) each morning and undertook study of the Torah, Talmud, Jewish philosophy, and human rights, in the afternoons, including having the opportunity to participate in a group conversation on human rights with a worker from the East Jerusalem Project, connected with the Association for Civil Rights in Israel. At the Yeshiva, we learned together in community, wrestling with the texts, our lives, our spirituality, and with the events going on around us in the land.

Several memories in particular stand out to me: one was a pilgrimage that we made as a group one morning to an egalitarian portion of the Kotel, or the Western Wall. The main part of the Kotel, to which the public has access (after entering through security and metal detectors), is divided into a side for men, and a smaller side for women. The egalitarian portion, where men and women can pray together, must be accessed through a special entrance, to which we had access at the time because of the rabbis who accompanied our group. I recall the prayers that morning at the Kotel– it was cool, a breeze, birds singing, with a gentleness, peace, and love that pervaded as the prayers were lifted up in chants and songs. 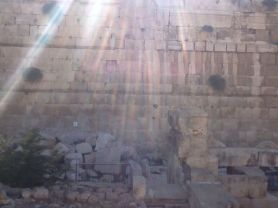 Another memory that stands in contrast to this scene of peace was the first time that I heard the air raid sirens go off. I was staying at a hostel in Jerusalem. It was in the evening, around 8pm, and I was in my shared room. Without warning, we heard the noise of sirens coming from outside the window, somewhere in the city. It was a slow, measured, low, yet oddly piercing howl. An announcement came over the loudspeaker informing us that this was not a drill and we were all to quickly make our way to the basement. People from all around the world, with confused expressions wandered out into the hallways. Some ran; everyone hurried. We went down the stairs and packed in the hallways in the basement. After a few moments, we heard two faint booms. It was over, and the staff informed us that it was safe to return to what we were previously doing. Everyone returned back to life, as normal as it gets under those circumstances: back to our rooms, the bars, the streets, the buses; life resumed. The sirens repeated similarly two nights later and again, two nights later, with the same procedure.

Israel has an air raid siren system that can detect an incoming rocket from within a certain radius of the city. When the siren goes off, one has ninety seconds to make it to a safe place. This is the amount of time that it would take for the rocket to land, but more likely, as in most cases that I experienced, the Iron Dome (Israel’s defense system) will shoot down the rocket. That was the source of the booms we heard. However, even here, shrapnel and other parts can fall, so shelter is still advised.

This was my first time entering into a zone of conflict. To be clear, I was never in a situation of immediate danger; however, I felt a taste of the fear and unease that can seep into one’s heart. It was a sense of the possible: of danger looming and many what ifs. In between the days the rockets were launched, I would sometimes forget about the situation, because life continued for everyone. But it is always in your mind. During this time, I would sometimes find myself wondering, perhaps as I walked alone up a path to the Old City, completely away from any shelter, what I would do if I heard the sirens. Fear is powerful. It gets into one’s mind, the fear, and one begins to live with it. In some cases, over time, I suppose one begins to act out of it.

For most people living in this land– Palestinians and Israelis– this is part of life. As I have said, Jerusalem is a unique city. There are many divisions within. First, the city is divided into what is referred to as the Old City and the New City. The Old City is the portion residing within the old, fortified walls. The Old City, within the walls, is further divided into four unequal quarters: Jewish, Muslim, Armenian, and Christian. Each quarter has a different “feel” and atmosphere. 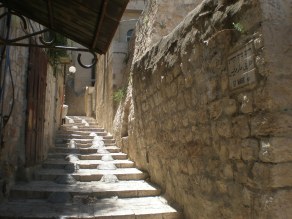 Furthermore, not only is Jerusalem divided into new and old portions, but is further divided into East and West Jerusalem, a controversial definition, depending upon whom one asks and a result following the 1948 Arab-Israeli War. After the war, Jerusalem was divided, with West Jerusalem ruled by Israel and inhabited mostly by Jewish Israelis and East Jerusalem ruled by Jordan and inhabited mostly by Palestinian Muslims and Christians. After the Six-Day War in 1967, Israel took control of East Jerusalem and the West Bank. In 1980, the Israeli government annexed East Jerusalem and attempted to reunify the city, but today, the East and West portions remain largely separated. Today, East Jerusalem is inhabited by both Jewish Israelis (a little less than half the population) and Arabs (a little more than half the population), with most of the Arab population being Muslim and a small percentage of Christians. The complexity of the situation and the years of conflict and tension come right to the heart of the city.

When I first arrived in Jerusalem in late June, I felt the tension, but life seemed yet relatively normal. There were many people in the crowded streets of the Old City, shopping, eating, visiting holy sites. But tensions were high in the land. Three Israeli teenagers had recently been kidnapped a couple of weeks prior. However, with a series of events over several days, peace crumbled, as the tension gave way to violence. The killing of the Israeli teenagers and later discovery of their bodies prompted strong responses, including a few days later, a retaliatory kidnapping and brutal murder by Israeli extremists of a young Palestinian boy from East Jerusalem. Riots followed in East Jerusalem and in the West Bank. With already soaring tensions, these events seemed to be the final straw that released a pent up anguish.

With this, fighting between Hamas and Israel resumed. Hamas rockets fired from Gaza; Israel rockets fired back into Gaza; lives were tragically lost on both sides, including many children and members of families living in the crowded conditions of Gaza. Hamas continued firing rockets into Israel, with Tel Aviv and Jerusalem becoming targets; Israel continued responding with more rockets; many more casualties resulted. And so the fighting escalated for a couple of weeks. I left Israel in the midst of this conflict, as my program had ended at the Yeshiva and my scheduled day of departure arrived. Whereas at the beginning of my time in Israel, I could walk into the Old City and see crowded streets, by the time the tensions had risen, the Old City had noticeably emptied. There were still some, albeit far fewer, tourists and travelers, along with a heightened number of police and soldiers, as well as those who lived in the city—of all faiths—continuing on with their lives. I continued to venture into the Old City during much of this time. I met vendors, many of whom made their livings from tourists coming to their shops; with tourism down, they could not make money on which to live. Streets that had once bustled with people had at this time become an empty place of despair. No one knew how long— no one ever knows.

I do not claim to be an expert on the politics of the Middle East or on Israeli-Palestinian relations. This was my first time to Israel and to the Middle East. But I was deeply touched and moved—as anyone would be— even if unsure of exactly how to make sense of the overload. As an American, I entered into a situation and conflict, within which I felt much like an outsider. I absorbed, observed, and learned. What I have shared here are some of my experiences, thoughts, and observations, having come, as something of an outsider, into this situation. I understand that the tensions are complex and have a deep history going back decades and centuries, stories of hurts and loss, suffering, fear, and the courage to survive within all the people. I do think something important happened during these weeks. A breaking point was reached, and a tension that had built for many years had erupted. I felt the city within which I was residing, ripping apart, like something valuable breaking in slow motion. 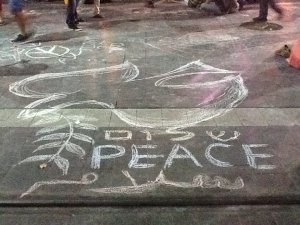 I remember walking at one point with a group and a guide through parts of the Old City. The Old City is like a maze of winding passages, narrow stone sidewalks, each path surrounded by tall walls and ascending and descending steps. It is impossible not to get lost. The Old City consists of layers of walls that reach back throughout history. Over the centuries, each time another group conquered the city, walls were built or torn down. Boundaries were renegotiated. Our guide kept repeating to us that Jerusalem is a city of layers and these walls hold secrets that are hidden. More is always hidden. There is more to be found.

That is the complexity of our lives, which this city and region exemplify. At the heart of this Holy City, there is peace yet tension and suffering. A glimpse of the sacred and something to be desired and yet difficulty fully getting there. It is the mystery that our faiths in various ways try to negotiate, the mystery of the sacred and the human, of life. More is hidden, and there is more to know.

I am grateful to have had the experience to be present on this journey. I was touched by all whom I met and by this city of Jerusalem. I pray and hope for healing and end with words of hope: Shalom, Salaam, Peace.

**All Photos by the Author